Parklets first appeared in San Francisco and have grown to become a worldwide phenomenon in just five short years. Parklets are essentially extensions of the sidewalk that reclaim on-street parking spaces. These spaces create centers of pedestrian activity in areas that lack urban parks or where the existing sidewalk width is not large enough to accommodate vibrant street life activities.

After installing the first parklet in 2010, San Francisco established a groundbreaking program called “Pavement To Parks”, a collaboration between the San Francisco Planning Department, the Department of Public Works and the Municipal Transportation Agency. The program established design standards and encouraged public and private participation to reimagine the potential of city streets, enhance pedestrian safety and interaction, foster neighborhood interaction and support local businesses by quickly and inexpensively converting underused public right-of-way into new pedestrian spaces.

This program was important as it established legal pathways for public and private parties to collaborate in creating vibrant pedestrian places. The San Francisco Parklet Manual has been published to provide a comprehensive overview of the goals, policies, process, procedures and guidelines for creating a parklet in San Francisco. The Manual also serves as a resource for those outside of San Francisco working to establish parklet programs in their own cities.

There are now close to 50 parklets in San Francisco as depicted in this map courtesy of Curbed San Francisco.


The following is a brief photo tour of typical parklets throughout the San Francisco area. The Economic Case For Creating Vibrant Pedestrian Environments Through Parklets 
University City District’s Department of Planning and Economic Development in Philadelphia recently released a report entitled The Case for Parklets: Measuring the Impact on Sidewalk Vitality and Neighborhood Businesses. The report can be downloaded here: http://issuu.com/universitycity/docs/the_case_for_parklets_2015?e=4547788/11667837

The UCD team studied usage patterns for six parklets, all located on commercial corridors in the University City section of West Philadelphia. The report quantifies these parklets’ ability to attract and retain users, the diversity of the users and uses, the impact on the sales at adjacent businesses, and the micro-scale environmental factors contributing to their success failure.

Key findings from the report concluded that: parklets can attract an enormous number of users (well over 150 unique users over the course of a day in the 240 square feet that could otherwise have hosted just one or two parked cars); that parklet installation coincided with a substantial boost in sales for nearby businesses(an average of 20%); parklets can have substantial spillover effects to nearby sidewalks and spaces; and parklet success can be predictable based on a few key environmental factors.

A parklet in West Philadelphia along with comments from survey respondents. UCD's report states “Parklets frequently became magnets for passers-by who slowed down or stopped to chat, squeezing onto the parklet or sidewalk, and adding to the palpable buzz of activity”


According to UCD’s research, nearly a quarter of users at the most popular parklet spaces were non-patrons of the restaurants directly adjacent to the parklet. This suggests that these spaces hold a powerful multiplier effect. Put simply: the presence of people serves to attract even more people.


UCD also found that there is little gender discrimination when it comes to users of parklets, meaning that parklets do not disproportionately attract more males than females. This is an important finding as the most successful public spaces provide a sense of security and psychological comfort among women. A strong female presence within a given space is often a harbinger for developing a sense of place.


This data coincides with a similar study examining the economic benefits of the nine parklets located within Chicago conducted jointly by the Metropolitan Planning Council and Sam Schwartz Engineering. The data in the report concludes that on average, the businesses adjacent to parklets realized a 10-20% increase in sales and 80% of these businesses reported an increase in foot traffic. Adding credence to the notion that outdoor seating areas contribute to creating the type of third places that make neighborhoods vibrant, 73% of parklet users surveyed indicated that if not for the parklet they would instead be at home. The presence of people increases the likelihood of increased commercial transactions as 34% of parklet users reported that they made unplanned food or beverage purchases.

The City of San Francisco published similar findings in a 2012 study that can be accessed here: http://sfgreatstreets.org/wp-content/uploads/2012/01/Parklet_Impact_Study_wAppendix.pdf

This study examined public perceptions of streets before and after parklets were installed. The results concluded overwhelmingly that positive perceptions increased after a parklet was installed when asked if the street was seen “as a place that looks clean,” “as a place to shop” and “as a place for socializing and fun.” The report summarizes that the increased pedestrian activity due to parklets made nearby businesses more visible therefore contributing to an increase in commerce along streets containing parklets.

A Living Street For Jacksonville?


Several streets throughout the urban core could benefit from increased pedestrian activity.

This eventually led to the redesign of Laura Street which broke ground in 2009. 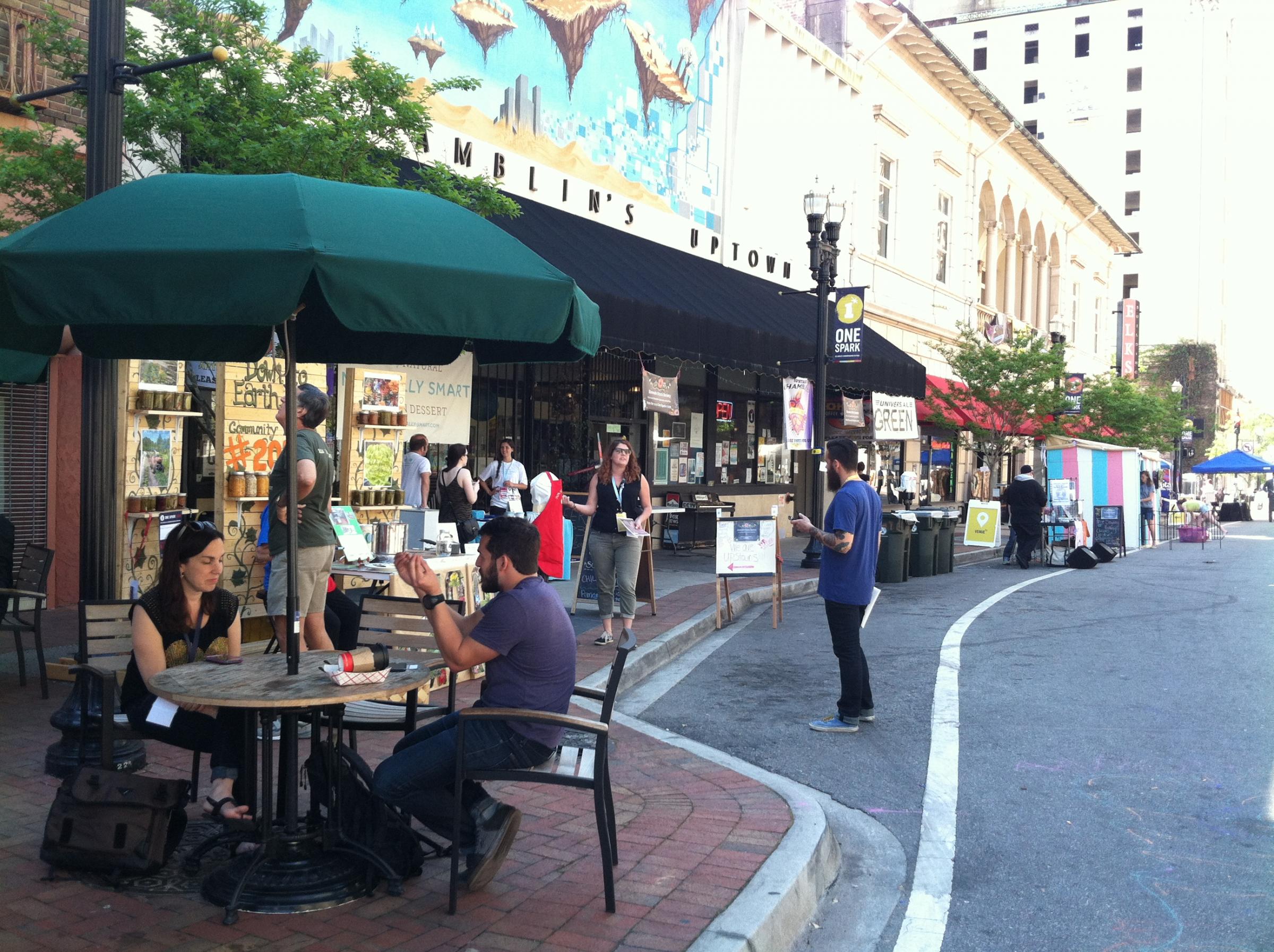 
This model shows that pedestrian-centric infrastructure improvements can produce incremental, short term positive outcomes to walkability issues downtown while setting the stage for future infill opportunities in the long term.

In 2012, TransForm Jax partnered with the City of Jacksonville, Downtown Vision, Greenscape, Trads Landscaping and the Cultural Council of Greater Jacksonville to celebrate Park(ing) Day, an annual event which eventually inspired the creation of parklets.

During this time, a low frills experiment was conducted along Adams Street exploring the use of a makeshift parklet outside Zodiac Grill. The restaurant and adjoining sidewalk experienced a definitive increase in activity. Could this set the stage for designating Adams Street as a more long term 'Living Street' experiment? Adams Street has the largest collection of uninterupted ground floor retail space in downtown, but lacks adequate sidewalk width to accomodate such uses as outdoor seating and bicycle infrastructure. This section of downtown posseses the kind of existing building stock necessary to take advantage of clustering a variety of compact and complementary uses, a hallmark of vibrant urban environments.

The Downtown Investment Authority already has a retail enhancement grant at its disposal to incentivize the renovation of ground-level commercial space. Creating a pilot parklet program along Adams Street to enhance outdoor dining access coupled with a targeted retail activation strategy which embraces the concepts of both permanent and pop up retail could quickly transform Adams Street into a 'living street' serving as a model for future investment strategies.

This article can be found at: https://www.metrojacksonville.com/article/2015-apr-parklets-of-san-francisco