Bring Back Jacksonville Traction: The Plan

Imagine, a light rail train in Downtown Jacksonville travels down Newnan Street, passes by the Florida Theater, just before heading down Water Street to the Prime Osborn Transportation Center. Could this be the future of Jacksonville Transportation?

Starting at the corner of Lee and Water Streets in front of the grand old depot, the line would travel East on Water and Independence, less then a block from the St. Johns river and the Riverwalk.  North on Newnan  moves the line away from the River towards Springfield, crossing Duval Street in the process. Turning East on Beaver  to Randolph takes the trolleys into the heart of the stadium district. While there is a gap in Beaver, it is a two or three block area, bisected by Hogan’s Creek and a beautiful urban woods.

This small section would give us the opportunity to prove to the masses, that trolleys run on track and can thus be landscaped, leaving only the running rails visible in a garden-like setting. But more on this nice urban space in a moment. Turning West on Duval Street, the cars would roll right past Hemming Plaza, and the front doors of City Hall, right in the heart of Downtown.  Entering the La Villa development area the car’s would turn South on Lee and return to the Terminal.  This forms a rough figure “8” through downtown.

To set up a future extension into the City’s historic Springfield preservation district, the Newnan Street line could continue North to First Street, hence West to Main or Pearl, then South to Duval and Westward on the above route. There is a JEA building at First and Main Street that would make a fantastic museum, car house and tourist attraction.  From this point it would be a simple task to take the line right on up to the 8th Street hospital district, perhaps on a reconstruction of the old Main or Pearl Street Trolley lines, once considered, “The most beautiful Trolley line in the World”. 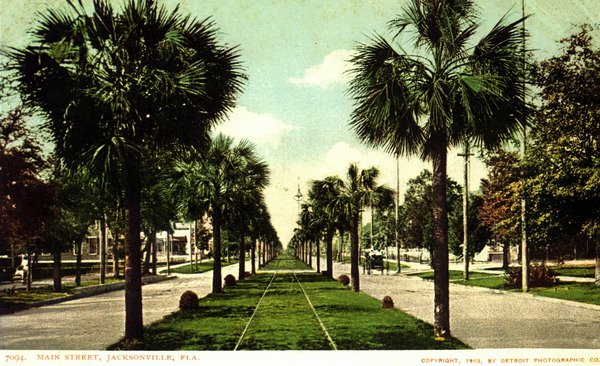 A new Skyway station at Newnan and Bay Streets on a Sport’s area extension would further compliment the connectivity of the whole network. A joint Trolley, Skyway, bus transfer facility at the sports district would enhance every venue at the ball fields and even allow for limited conversion of surface parking lots into green spaces.

The popularity of streetcars and the concurrent development dollars they generate is thought to stem from the fact that the route is fixed, unchangeable without much expense, and effort. Unlike buses, where if the route fails the bus can be re-routed, the newly returned streetcar lines in the nation have spurred billion’s of dollars in development. Further, unlike buses, or trolley-like buses, the streetcar draws real tourists and provides more riders due to a child-like desire screams, “Mommy, I want to ride that one”!

A development that would have a major impact on the City and be a natural fit for the streetcars could be located along that wooded gap in Beaver Street and along Hogan’s Creek.  This little creek runs through an urban forest and abandoned industrial building and rail right-of-way mix from the State/Union Street freeway, South to the St. Johns River.

This urban creek could be channeled and built into a tour boat route with a Oklahoma City or San Antonio like River (or Creek) Walk. The abandoned warehouses could be recycled as condos and shopping centers, a Hogan’s Creek walk could put a whole new dimension in Jacksonville’s popular Riverwalk system.

At the empty wooded lot at the Beaver Street gap, is an opportunity for a return of Jacksonville’s once famous “Dixieland Amusement Park”. This park once located in the City’s South-bank featured a sort of permanent combination Carnival-Worlds Fair-Tropical Expo, complete with midway and themed rides. Being the North Anchor to a Creek-Walk with two streetcar crossings, a Skyway crossing and sandwiched between the urban core and sports district should bode well for any recreational development.

Extensions South into San Marco, or San Jose, might be established by using the cut and cover method over the Main Street Bridge or New Acosta Bridge in downtown. The access to historic Riverside-Avondale could use the Myrtle Avenue underpass, the Lee-Park Street viaduct or the New Acosta bridge to pass over or under the railroad tracks. Just as the original Jacksonville Traction Company had done, Forest Street could be used to bring everything into the heart of Riverside Drive. A line into Riverside opens the door to future reconstruction of the original Murray Hill, Ortega, Edison/Seaboard Shops lines.

A ride on the new streetcar’s would not only be fun, it would serve a transportation purpose. Leaving from connecting park and ride lots, bus, or train service, at Jacksonville Terminal, one would notice the beauty of the historic streetcars or the sleek large modern-streetcars. The first thing that is noticed is when the doors open - the car is silent, except for the hum of the air-conditioner, and the occasional thump of the air compressor.

Fare is collected, a seat found, and the car starts with a slight jolt. It squeaks in protest at the sharp curves out of the station and around the Lee and Water Street corner. The ride is glass smooth as we quickly accelerate under the Skyway and head East. To the right is the Federal Reserve Building, CSX headquarters and Times-Union Performing Arts center. On the left we pass the Omni Hotel and Wachovia Bank.

We pull up in front of the Jacksonville Landing Complex and the crowd changes,  many off and  some board. Spending time at the Landing, many tourists are seen enjoying the shops, food and stunning river views. Re-boarding we roll past the Modis Building, and under the Main Street Bridge to Newnan Street. Swinging North, the old streetcar claws its way up the hill from the river without the expected hesitation, clattering over the crossing at Duval and a turnout at Beaver.

At Beaver, it swings right and duck’s into a beautiful wooded park. It looks like another typical Jacksonville neighborhood party, everywhere people enjoying the Creek Walk, the shopping, and  carnival atmosphere.

Again the crowd changes, and we move off across Hogan’s Creek, past the Water Works and enter the Sports area. Racing down Randolph, we pass historic churches, manicured green space and wrought iron fences. Some venue at the Ball Park has just ended and the transfer station is packed with riders. Buses are lined up in a bus lane, across the platform is a four car Skyway train, busy transferring the crowd. Our big streetcar stops in line with a few others as it takes on dozens of happy fans. Leaving the station, it paw’s its way over the bridge re-crossing Hogan’s Creek, and merges into the Duval Street traffic lanes.

We clatter over the streetcar crossing again at Newnan Street, passing historic homes and churches along the way. Soon the car pulls up in front of City Hall and again goes through a passenger transformation. Many disembark for the nearby Hemming Plaza Skyway station, we join them in the pleasantry‘s, soaking in the throbbing urbanism of downtown.

As the Streetcar pulls away, it’s bell fades in the distance, I note the City Hall’s upper window. A curtain is pulled back and I think, if but for a second, I see the figure of the mayor and new transit director looking down upon us, smiling. I find myself wondering; if I looked back on my life 50 years from now,  how would I feel if I had not promoted the Trolley? My friends and I hold our heads high secure in the knowledge that this is more then an idea, this is a concept that captures the soul of a City.

This guest column was written by Robert W. Mann.
Robert has spent the last 3 years of his private transportation consulting business working with the Secretary of Transportation, Inspector General and Professor of Railway Engineering in the Republic of Colombia, to rebuild the Nations Railroads. Now back in the States, he and his wife plan their return to Jacksonville and a renewed interest in the City's Transportation and Criminal Justice problems.

This article can be found at: https://www.metrojacksonville.com/article/2007-jul-bring-back-jacksonville-traction-the-plan