With consultants being hired to come up with a plan to redesign Friendship Fountain and the surrounding park area, taking a look at original Riverwalk master plans would be a great place to start. Today, Metro Jacksonville exposes a few of these studies, with the hope that one day the concepts found here will come to fruition, simply because they made sense then and still do today. 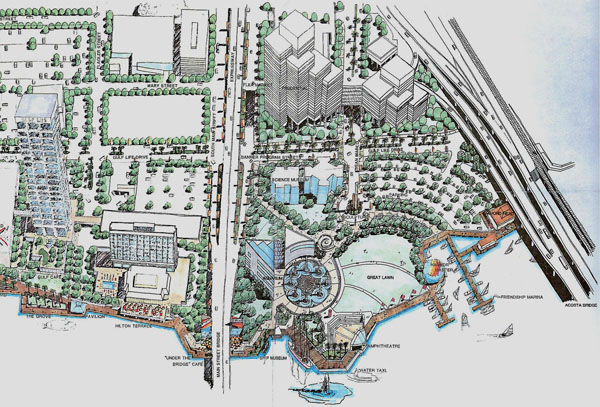 Under the Bridge Café
A Sidewalk Café that would link both sides of Riverwalk. Never built.

As you can see in the illustration above, the Southbank would have become a great attraction if we had only stayed the course and continued to work to fully implement the master plan. Despite this concept being over 20 years old, it is still possible to dust it off and finish out the Friendship Fountain area, since its renovation is front and center now. The plan shown in the graphic contains a mix of activities for people of all ages and cultures, which is the key ingredient to creating great public spaces.

Like its southern counterpart, this project was also supposed to be much more than what you see today. The early 1980’s saw a dramatic shift in the development of downtown. Between the release of the 1971 Master Plan study and the beginning of Jake Godbold’s administration, the development of downtown began to grow along the river, instead of to the north, as it had done decades earlier.

As a result of this, and a visit to San Antonio's Riverwalk, Godbold announced a 3-phase $250 million dollar plan for the Northbank riverfront. New projects, such as the Southern Bell Tower, a hotel (eventually the Omni), convention center and festival marketplace would replace the 1970’s proposals. In 1980, officials announced plans for the $2.5 million dollar St. Johns River Esplanade. The Esplanade would be a linear waterfront park extending from the CSX building to the Main Street Bridge. It would be a place where the public could partake in activities such as jogging, fishing, cycling, lawn games and picnicking in the Northbank core.

Unfortunately, things didn't turn out as originally conceived. While this plan was being hatched, the Jacksonville Historic Commission and local preservationist fought to have abandoned Union Terminal renovated into a convention center. On the other hand, downtown advocates, including the local AIA chapter and Preston Haskell fought to have it built at the original proposed site, which is where the Omni and Wachovia Tower stand today. They felt the railroad station was too far away and that a convention center in the core would help create synergy and stimulate heavy pedestrian activity with the Hemming Plaza retail area, the civic auditorium and the planned festival marketplace.

In the end, preservationist won out, eventually causing half of the DDA members to resign, along with the closing of the Holiday Inn City Center and many Northbank retail establishments. Although the Esplanade never made it off the drawing boards, several studies involving the Northbank Riverwalk would be created throughout the years, three of which we'll briefly discuss below.

Northbank Riverwalk Master Plan - 1989
Although a large segment of the Riverwalk opened right before the 2005 Super Bowl, most of it was planned as far back as 1989. This plan called for a Riverwalk to be constructed from the Fuller Warren Bridge to the Shipyards. In the Brooklyn area a series of activity nodes or "landings" were supposed to be constructed where streets dead-end into the walk. Each Landing was supposed to include information kiosks, food concession facilities, mooring slips, enclosed pavilions, restroom's and water taxi stops. 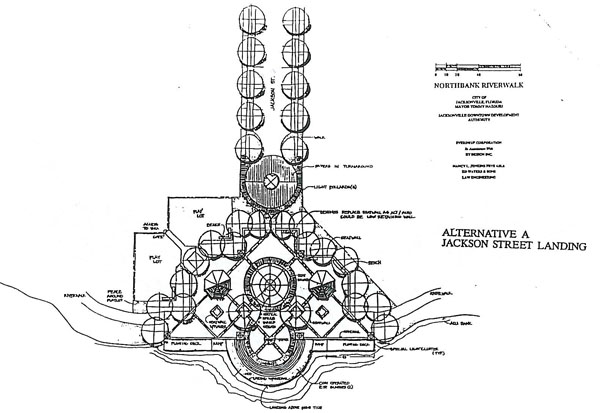 Meca Study – 1990
This time the consultants hired by the DDA were BHR and ERA. The Major Entertainment Complex Attraction Study (MECA) looked at taking the existing civic auditorium property and converting it into a major cultural hub with several museums adjacent to the recently opened Landing. Cultural components included a $15 million, 40,000sf mini-aquarium, maritime museum, 80,000sf Sports Immortal and 100,000sf arts museum. The Daniel Building, now owned by Hyatt, was also looked as possible location. Eleven concepts were offered as a result of this document. Nevertheless, the suggested options ended up on the back of the shelf. 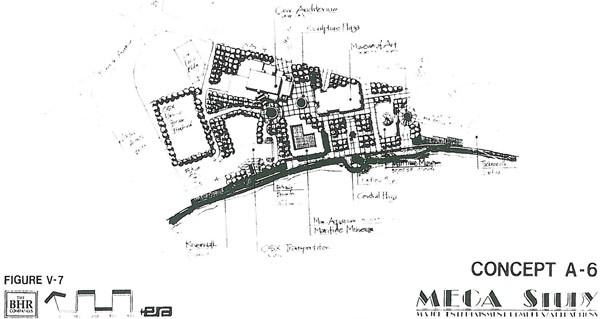 Figure V-7 / Concept A-6 shows a proposal that involved reconfiguring the Times Union Center into a cultural complex which included four additional attractions fronting the Riverwalk and surrounding a central sculpture plaza. 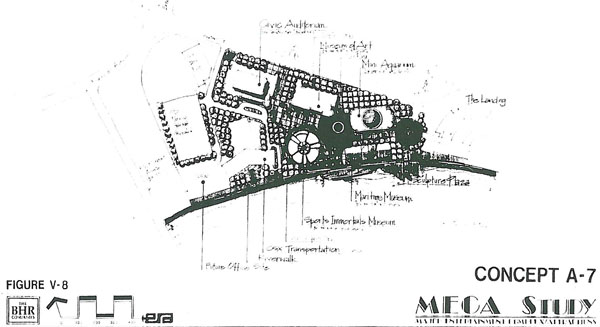 Figure V-8 / Concept A-7 shows an alternate layout for the same site. While plans were impressive, they unfortunately included developing public buildings on privately owned property, such as CSX's adjacent parking lots.

Northbank Riverfront Park – 1991
Downtown development would come to an abrupt halt during the Hazouri administration. However, the amount of studies continued to increase. A year after the MECA study, another was done with the intention of livening the space between the Times Union Performing Arts Center and the river. In a city that still struggles to understand the importance of urban parks and the relationship with their surrounding area, this two acre $4.6 million dollar park plan was decent. Sverdrup Corp., the consultant, designed 3 concepts for a linear park that would include a mixture of green space, seating areas, fountains and outdoor plazas. Unfortunately, like those before it, it never came to fruition. 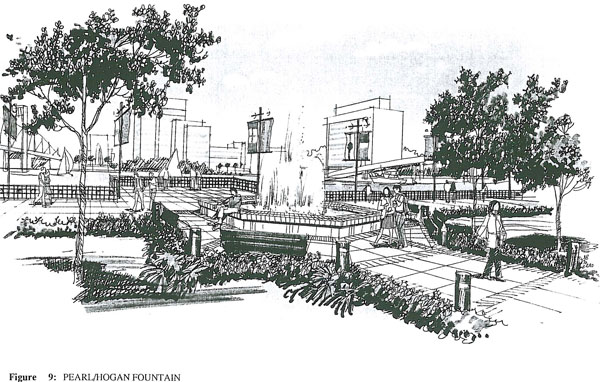 This fountain would have been located at the center of the Northbank Riverwalk Park, in front of the Times Union Performing Arts Center. 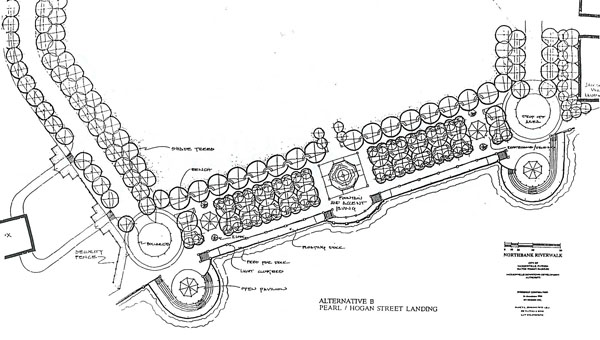 This illustration shows the plan for one of the three concepts presented by Sverdrup Corp.


Where do we go from here?

As stated earlier, we've amassed enough studies and master plans that we need to step back from creating more and seriously consider implementing the best parts of the many public projects that were never built as originally planned. Below, we'll share and example of one such case. 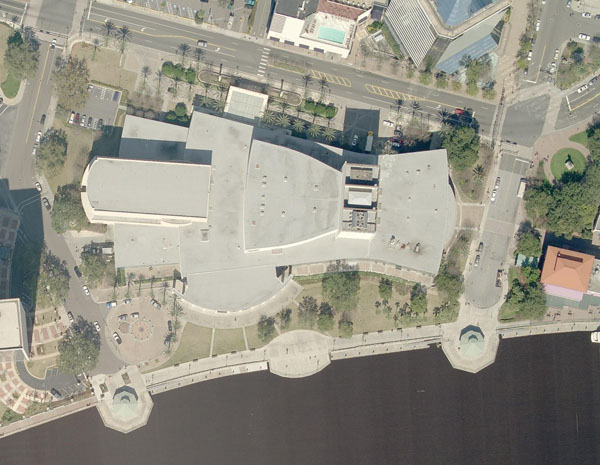 A 2006 aerial of the Times Union Center shows a performing arts facility that lacks inter-connectivity with its surroundings.

Many times before, it has been mentioned that the city owns several blocks of under-utilized land in the downtown core. Sometimes, we tend to overlook several parcels because they may already be developed. One of those sites is the Times Union Performing Arts Center.

With the amount of special events occurring at the center, the Landing, and the Riverwalk on a regular basis, at some point it would be a good idea to enhance this public owned parcel by building out the Northbank Riverfront Park plan and incorporating destination dining/retail/cultural uses immediately adjacent to the Times Union Center.

Given the attractiveness of the site, this is a situation where the city could possibly issue a Request for Proposal (RFP) for potential high profile spots around the center, strengthening the connection to its surroundings and creating a more dynamic atmosphere in the process. 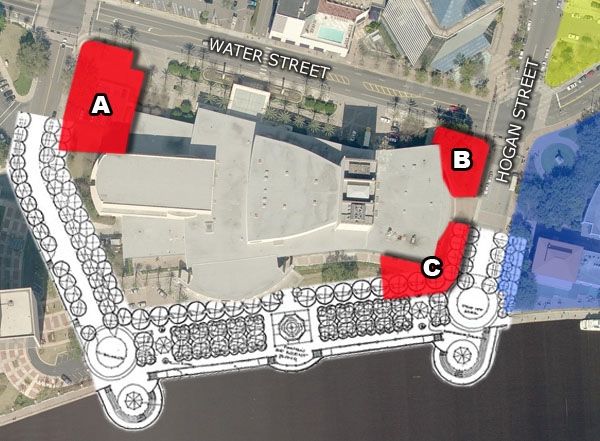 The illustration above combines the 2006 aerial with the 1991 park plan, as well as three potential spots for additional development.

Site A, the largest, is located at a prominent entry point to the Northbank riverfront district. Being adjacent to the performing arts centers main entrance, it would be an ideal spot for an additional cultural attraction, museum, or large scale sit down restaurant with outdoor seating.

Sites B & C would help connect the center with the riverfront park and Jacksonville Landing. In an ideal situation, Hogan Street, south of Water Street, could become an extension of the riverfront park, helping to tie the entire area in with the city's Laura Street plan. Given the small size, Site B would probably be best suited for a small sidewalk café or retail enterprise. Site C would be a great location for an establishment seeking riverfront views. 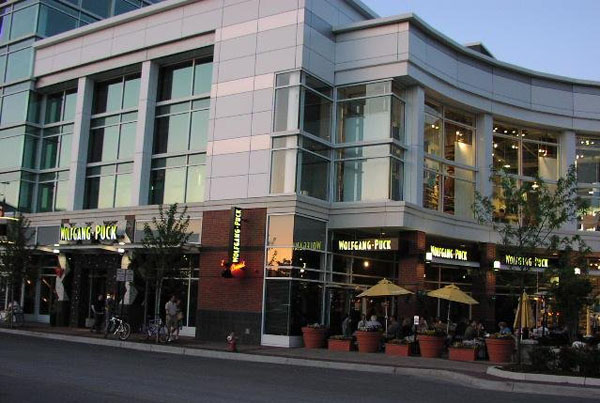 This Wolfgang-Puck restaurant is a perfect example of the type of business that could take advantage of under-utilized performing arts center property to help create a true pedestrian friendly urban experience.