?This is the city's gateway. It's a critical element in the way people perceive downtown. But it's also a critical thoroughfare for Springfield.? - Brad Thoburn, Florida Times Union - 8/23/00

The revitalization of Main Street has become a highly debated topic within the urban core.  Many believe the path to revitalization centers on big developers and new construction.  Others believe the focus should be on attracting and retaining small local businesses.  A close look at Main Street reveals the current environment may call for both.  The key is understanding the existing environment and working together without sabotaging differing viewpoints.

Located outside of the official historic district, this stretch of Main Street is the northern gateway to the neighborhood. It contains the highest traffic counts and is also the most ignored in the Springfield trade market.  Despite this, several businesses continue to flourish in the vicinity of MLK Parkway.  Furthermore, potential commuter rail along the S-Line corridor gives this stretch transit-oriented development potential.

Jokingly referred to as the "Chicken District", this stretch of Main is the most successful commercial strip in the community. Dominated by national fast food chains, it is also a real life example of similar businesses and competitors clustering together.  In regards to commercial revitalization, embracing existing successful businesses in the community should be endorsed.  This strip should serve as a starting point for building toward a stronger commercial corridor.

Dominated by a collection of historic commercial storefronts in the heart of the neighborhood, this area is the most urban and pedestrian friendly section along Main Street.  It is also a place for small business investment and focus because of the high number of existing buildings and small properties with multiple owners.

Like the blocks to the north, it also contains several successful businesses that a revitalization plan should rally and cluster around. Concentrating on filling this area, along with the successful strip of national fast food restaurants immediately to the north, will instantly change the image of Main Street.

The Florence Court Apartments during the late 1970's.

Because of the high number of vacant lots and abandoned car dealerships, this stretch of Main is the most difficult to address with today's economic conditions.  However, with the Lofts at 3rd & Main under construction, there is the opportunity to create a small center of businesses that cater to a higher ended clientele.  SPAR's building should also be looked at as an extension of street level activity that may take place in 3rd & Main's retail spaces.  The use of SPAR's building for complementing development can be viewed as a way to enhance the organization's financial conditions and visually improve this area of Main.  As the market improves, this area's large plots of vacant property will attract new construction that complements the investment at 3rd & Main.

Also known as "The Space Inbetween" or "No man's land", the stretch between Union and 1st Streets serves as the southern gateway to Springfield.  Here, there is an opportunity to enhance public park space and better integrate FCCJ's Downtown Campus with Main Street, Springfield and Downtown.

Springfield should aggressively support the S-Line as a commuter rail corridor.  Rail will impact the community more than anything else currently on the table.  Outside of this, the northern gateway should be allowed to continue to flourish as a corridor catering to the surrounding community.

Similar to Toronto's Bloor Street, this stretch of Main Street has the potential to develop into a diverse commercial district that caters to the everyday needs of the surrounding community.

Embrace existing chains and work to better integrate them into the surrounding community.  An example of this would be working to create locations for outdoor seating adjacent to the new sidewalks being constructed along Main.  This inexpensive addition helps make suburban buildings become a part of a walkable urban environment.

This suburban McDonalds in Louisville's Highlands District features outdoor seating between the sidewalk and the building.  The same could be accomplished with Springfield's existing fast food restaurants to enhance the visual appeal of Main Street.

Take advantage of existing buildings by working to cluster vacant storefronts with businesses that complement existing successful businesses in the area.  As opposed to new construction, a high priority should be given to the improvement of building signage, lighting and facades.  Better maintenance of what is already there will enhance the atmosphere of Springfield as a district with its own unique sense of place.

Buffalo's Elmwood Avenue is an example of an urban district where existing historic buildings were filled with complementing local businesses.

Large vacant lots eventually call for new construction.  New construction results in higher leasing rates, thus stronger potential for higher end businesses (as long as the demographics support them).  While existing market conditions make new projects more difficult to pull off, this area has the strongest potential for businesses that may cater to higher ended clientele.

Uptown Charlotte provides a glimpse of the type of environment new infill development can bring to the vacant lots of Main Street.

Push for additional pedestrian integration with FCCJ's campus and Downtown.  Focus on making Main a stronger gateway by pushing the city to convert the street into two-way traffic between State & Union Streets. 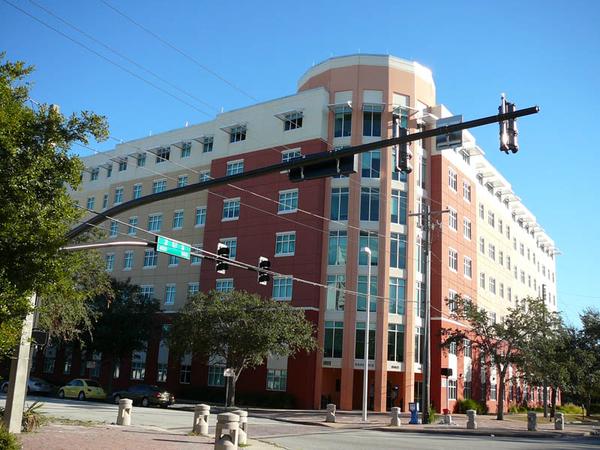 Recent construction on the campus of USF St. Petersburg places the access points of buildings on existing streets.  Working with FCCJ to make sure their future plans are better integrated with adjacent streets like Main will lead to vibrant urban atmosphere.

Pulling it all together

Any revitalization plan for Main should acknowledge that it is a +20 block commercial corridor with a mix of environments that call for different redevelopment strategies.  Despite the variety, a unified district can still be created through the use of complementing business signage, lighting and a theme where all establishments embrace the sidewalks currently being upgraded by the City of Jacksonville.  In addition to this, a major push should be established to bring additional pedestrian cross walks, signage and cycling opportunities to the immediate area.  These improvements will not only enhance walkability, they also make the area more accessible, which is an important factor that will attract additional retail opportunities.

Additional signage notifying drivers of crosswalks, as shown at this Savannah intersection, are an example of an inexpensive solution that enhances walkability in urban mixed-use neighborhoods.